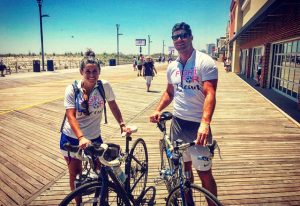 South Jersey Eye Associates’ very own Dr. Brandon Wuzzardo, along with his girlfriend Kayla, will be riding in the American Cancer Society Philadelphia to Atlantic City Bike-a-thon on Sunday, June 10, 2018.

The American Cancer Society has contributed to a 20 percent decline in cancer death rates in the US since the early 1990s. That means they’ve helped save nearly 1.2 million lives during that time, thanks in part to people like you who make a donation. Consider donating today.

Together, we can finish the fight against cancer!